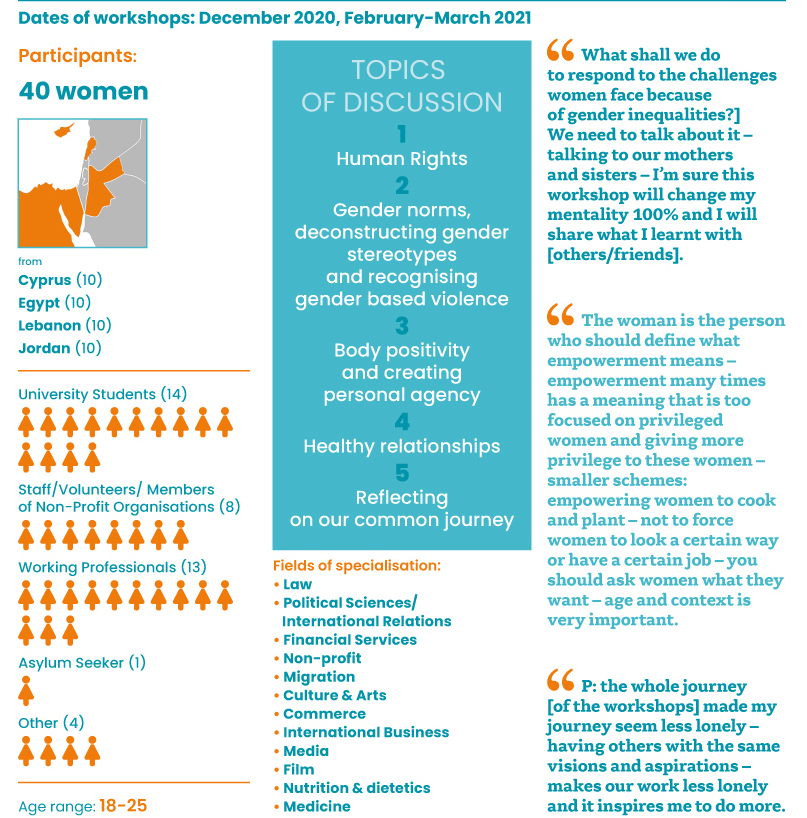 Young women from Cyprus, Egypt, Lebanon and Jordan came together in the online seminar “Building healthy relationships and enhancing gender equality”to discuss gender norms and explore tangible implications of human, gender, and health rights to women’s lives.“The whole journey [of the workshops] made my journey seem less lonely– having others with the same visions and aspirations – makes our work less lonely and it inspires me to do more”, a participant notably mentioned on her experience.The seminar was addressed to women aged 18-25 from Cyprus, Egypt, Lebanon and Jordan, and was divided in two sessions with a series of online, regular meetings between December 2020 and March 2021.

The seminar was coordinated by the Heads of the Anna Lindh Foundation Cyprus Network, which consists of the NGO Support Centre and Rooftop Theatre Group, and implemented by the Cyprus Family Planning Association and the Mediterranean Institute of Gender Studies and their experienced trainers.The selection of participants was made through an open call, where the number of applications exceeded all expectations, with a final selection of 40 women from the countries involved. Through the use of non-formal education methodologies and interactive tools, the participating women became informed about decisions on their reproductive rights, gender stereotypes and building healthy relationships based on equality and respect and had the opportunity to engage in discussions addressing gender inequalities, assertive communication and body positivity in their societies; as one participant pointed out, “acknowledging our human rights in a deeper way in order to realize when we are harassed and to learn more things about consent is very important for our lives”.Participants also had the opportunity to speak with Mr. Samir Anouti, Regional Adviser for Youth & HIV/AIDS of the United Nations Population Fund (UNFPA) about the programmes offered by UNFPA in the Arab region to support women’s health and rights.

Women who participated in the seminar were eager to continue working together and advocate for women’s rights and finding more opportunities to share their voices.“[We want to take this further]to promote programs like this amazing program in order to empower women…to promote more documentaries or educational movies for women’s achievements and women’s fights…In order to make womanhood stronger and make each woman love and admire each other as it should”, remarked one of the participants. 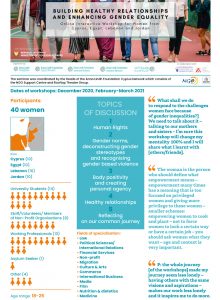 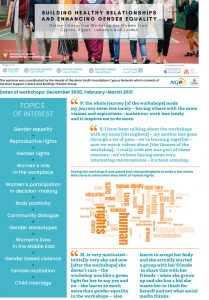 We use cookies on our website to give you the most relevant experience by remembering your preferences and repeat visits. By clicking “Accept”, you consent to the use of cookies. However, you may visit "Cookie Settings" to provide a controlled consent.
Cookie SettingsAccept
Manage consent

This website uses cookies to improve your experience while you navigate through the website. Out of these, the cookies that are categorized as necessary are stored on your browser as they are essential for the working of basic functionalities of the website. We also use third-party cookies that help us analyze and understand how you use this website. These cookies will be stored in your browser only with your consent. You also have the option to opt-out of these cookies. But opting out of some of these cookies may affect your browsing experience.
Necessary Always Enabled
Necessary cookies are absolutely essential for the website to function properly. These cookies ensure basic functionalities and security features of the website, anonymously.
Functional
Functional cookies help to perform certain functionalities like sharing the content of the website on social media platforms, collect feedbacks, and other third-party features.
Performance
Performance cookies are used to understand and analyze the key performance indexes of the website which helps in delivering a better user experience for the visitors.
Analytics
Analytical cookies are used to understand how visitors interact with the website. These cookies help provide information on metrics the number of visitors, bounce rate, traffic source, etc.
SAVE & ACCEPT
Powered by